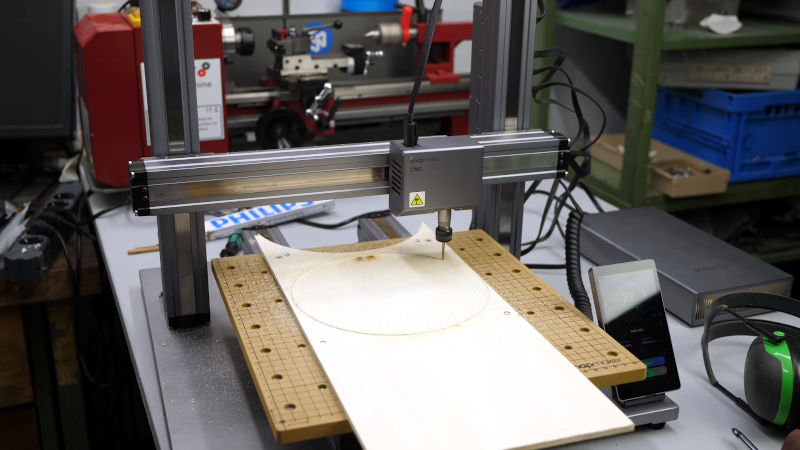 Most of us have or want a 3D printer, laser engraver, and CNC machine. However, if you think about it naively, these machines are not too different. You need a way to move in the XY plane and usually the Z axis as well.

Sure, people mount extruders on CNCs, or even lasers or Dremel tools on 3D printers. However, each machine has its own specifics. CNCs need rigidity. 3D printers should be fast. Laser engravers and CNCs usually don’t require a lot of Z-movement. So common sense would tell you that it would be difficult to design a machine so that all three functions work well in every use case. [Stefan] thought so too, until he got his hands on a Snapmaker 2.0.

As you can see in the video below, the machine uses different tool heads for each function. The motion system remains the same and, oddly enough, there are three identical linear motion modules, one for each axis.

In addition to the interchangeable heads, you also need to swap out the beds for various functions. That said, a quick switch is actually not an option. [Stefan] There are reportedly 22 screws that can be used to secure the heated bed for 3D printing, for example.

This is not cheap, of course, but if you had to buy all three machines you would probably be spending the same amount, especially on all aluminum-framed machines. There are some tradeoffs. The linear modules use a lead screw, which is an unusual choice on the X and Y axes for 3D printers because they are slow and have more slack than belts. However, [Stefan] found the quality to be good, although the print speed was slow and loud.

When machining with the CNC head, the rigid lead screws are of course a plus, even if the 50 W spindle will not replace a larger CNC machine. He could even work aluminum slowly. The laser head is modestly powered but has a camera and a low-tech air assistant, although it is not a suitable air system. A total of, [Stefan] I had the feeling that the machine could be used in all three phases. He missed a distinctive emergency stop switch on the machine or even on the graphical user interface.

Overall, the Snapmaker looks like a good concept with some implementation issues but no show stopper. Like most amateur builds, the machine is basically a small CNC with accessories for laser cutting and 3D printing. Could You Build Better? May be. Adjusting the build quality and software integration of the device wouldn’t be trivial, however.

We have seen conversions from 3D printers to a laser or a CNC more than once. The results will vary, of course, but it is doable.