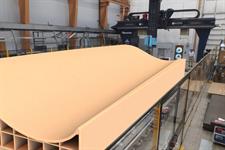 Researchers believe that a 3D printing solution could reduce lead times by at least six months and wind turbine blade development costs by 25-50%.

In 2019, the university commissioned the world’s largest polymer 3D printer to supplement its wind blade test facility – the second largest in the United States.

Currently carbon fiber reinforced ABS (Acrylonitrile butadiene styrene) Thermoplastic raw materials (widely used in large-scale 3D printing) cost more than $ 11 / kg. The university intends to use bio-based materials made from wood to reduce the cost of the raw material to less than $ 4.4 / kg.

The executive director of the University’s Advanced Structures and Composites Center, Habib Dagher, said the project could help advance sustainability.

She said that by combining “cutting edge 3D printing manufacturing with bio-based raw materials … [m]Molds made with these materials can be ground and reused in other shapes, making them a more sustainable solution. “

According to the university, such bio-based materials promise mechanical properties similar to aluminum with lower manufacturing costs.

In addition to the $ 2.8 million grant from the Department of Energy, Energy Efficiency and Renewable EnergyThe university will partner with Oak Ridge National Laboratory (ORNL), which received a $ 4 million award, for better control over mold surface temperatures.

Controlling surface temperature is a critical part of mold making and it is hoped that the new ORNL technology will enable robotic deposition of heating elements, reducing the time and cost of mold making.

TPI Composites and Siemens Gamesa (SGRE) are collaborating with the University of Maine on this project.

They claimed a successful demonstration project will put both SGRE and TPI on the right track to transform the additive manufacturing solution developed by the university into real world applications.