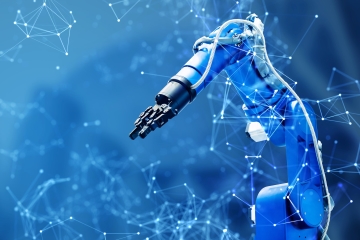 Researchers recently combined motion tracking technology with a 3D printer to create a printer and then print on moving body parts. What advantages do printable sensors offer, what challenges do they face and what have the researchers achieved?

When it comes to the medical field, it is often imperative to connect sensors to a patient. Sensory data collected from patients can provide medical staff with information about their current status, predictions of short-term health status, and long-term data for studies to improve diagnostics.

However, current sensors are large, bulky, rigid, and often very inconvenient, making them difficult to use on even the most shy of patients. People with dementia often unplug cables and devices they fear not recognizing and can lead to extreme monitoring difficulties. In addition, the human body is organic and as such can bend, stretch and move. This makes it difficult to attach sensors, as adhesives and tapes can either damage the sensors through stress or drop them.

Printable Electronics is an area of ​​study that deals with electronics that can be printed with liquid-like media. While not all printed electronic devices are flexible, many aim to be such that they can be printed on all types of flexible media.

Flexible sensor demonstrations have already shown that they can work well on human skin and other flexible surfaces, but other challenges remain, such as: B. the simple application. Additionally, drawing sensors with pen-like tools can be a challenge for patients who do not remain calm. Applying such sensors using printer technology is challenging when the patient breathes (which causes movement and stretching in the skin).

Researchers at the University of Minnesota have recognized the challenges faced by printed electronics on moving organic surfaces and combined motion tracking with a 3D printer. The idea behind the development is that moving surfaces can be tracked with the same technology that is used in Hollywood film productions. This can then be fed into a 3D printer, which can adjust its relative position in real time.

While the team had discovered the concept of combining motion tracking and 3D printing two years earlier, the latest development has improved motion tracking significantly. It allows for a greater degree of movement. The researchers demonstrated this by moving their hand in both the X and Y planes while rotating the hand. In addition, the improvements in the motion tracking system enable the imaging of organs that are expanding and contracting (e.g. lungs) and enabling printing on surfaces such as the chest.

First, the team experimented with a balloon surface to see how the motion tracking software would interpret expansion and contraction. A hydrogel-based sensor was then printed on an animal lung, which was artificially inflated and deflated.

How will this technology help the medical field?

Using motion tracking with a 3D printer to print sensors on organic tissue has far larger applications. The first and foremost is to use motion tracking with surgical robots. Robotic systems work very well in scenarios where the object being processed is either static relative to the robot or its movement is numerically controlled (e.g. a conveyor belt). However, the human body moves in unpredictable ways and, as such, a robotic system would need to track organs and tissues while they are being worked on. Therefore, a motion tracking system built into a robotic surgical system would essentially create a relative origin that corresponds to changes in motion of the human body and internal organs.

This technology is still a long way off, and printing sensors on organs poses many challenges, such as: B. Biocompatibility and Interference. However, motion tracking with 3D printing technology is already showing how robot systems of the future will negate patient movement.