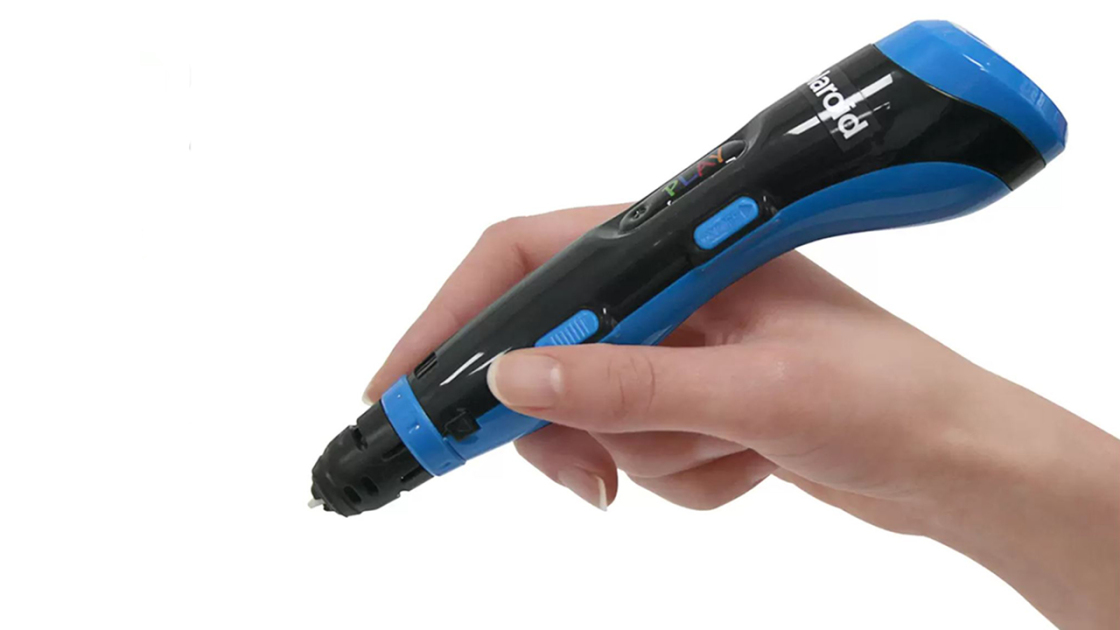 The Polaroid Play 3D Pen is an engaging product that continues the tradition of happy, artisanal gear we saw in the Polaroid PlaySmart 3D printer last year. Targeted at crafters and 3D print dabblers, this device is fun, for the most part easy to use, and costs $ 39.99.

The Play 3D Pen is sold exclusively through the JoAnn chain (in store and online) in the US. It is one of three similar models recently released by Polaroid. The Polaroid Root Play 3D pen has a wood finish and comes with three types of composite wood filaments. The Polaroid Fast Play 3D pen contains three interchangeable nozzles that you can use to change the extrusion speed.

The blue and black glossy Play 3D Pen measures 1.9 x 1.4 x 7.1 inches and weighs 5.3 ounces. It’s bigger and curvier than the conceptually similar but high-quality WobbleWorks 3Doodler Create +, and feels less like a pen than more like a soldering iron. When in use, hold it near the front end, angled down, with the middle between your thumb and forefinger.

In addition to the pen itself, the Play 3D Pen Kit comes with a holder that the pen can rest in when not in use. This means that the extruder is pointing downwards and there is no risk of someone being accidentally burned. (The extruder can reach 200 ° C. For this reason, Polaroid does not recommend using the pen by anyone under the age of 14 unless supervised by an adult.) The hardest time for burn potential is peeling plastic debris from the hot end .

Also included is a power plug that plugs into a cable that ends in a USB Type-A port suitable for a cell phone or similar charging block (Polaroid suggests 5 volts / 2 amps), power bank, or computer is. You also get a screen protector for tracking objects based on patterns on a device screen (more on that in a moment) and small sticky squares to keep the protector in place. Finally, the Play 3D Pen contains four 5-meter starter kits with PLA filaments, each of which has a different color, and a quick guide.

Care and feeding of the filament

There are two holes at the end of the pin opposite the extruder; One fits on the power plug and the other is used to feed filaments. Once you’ve plugged in the cable, press the next button on the left, and a light on top of the pen will turn red. If after a few minutes the light turns blue, you can load the filament by holding down the push button (the other button on the left) until you feel the filament being pulled into the pen where it goes into a heater Chamber. When the filament begins to extrude (exits the front nozzle) you are ready to create it.

Two arrow keys on the right, halfway up the barrel, speed up or slow down the extrusion. Up to eight extrusion speeds are possible depending on how many times you press each button, but I found it difficult to adjust the speed. For one, there is nothing that identifies the speed setting, so all you can hope for is that pressing the button will have the desired effect every time.

To retract the filament, simply press the power button for two seconds and the remaining filament will come out. A nice feature is the game’s self-retracting shutdown. After seven minutes of inactivity, the pen turns off, pulls back the filament, and cools down. When loading a new filament color, make sure that all of the old filament has been extruded and the new color is showing before you apply it.

Both loading and retracting the filament proved to be hassle-free in my tests. This was generally not the case with the WobbleWorks 3D pens I tested, such as the 3Doodler Create + Leather Edition. Some had filament jams and I had to open the pen and pull out the filament plug with a tool.

Additional filament is available in packs of 20 5-meter strands in a variety of colors from JoAnn for in-store pickup ($ 24.99) or from Amazon (approx. $ 40). However, I have found that the filament packs are currently unavailable on my next JoAnn and it would be at least a week before I can be reached with the fastest delivery from Amazon. However, the pen is also compatible with Polaroid Universal PLA filaments, including Premium PLA, Multi-Color, Glow-in-the-Dark, and Deluxe Silk.

Draw on a screen, on paper, or in the air

You can either draw freehand – on paper, fabric, wood, or other materials – or use a stencil. The Polaroid Play Trace iOS / Android app offers a small selection of patterns to draw. You can put the included screen protector over your device, but the protector is just big enough to fit the screen of my iPhone 11. Unless you’re familiar with tiny, intricate sketches (and you can do it with a chunky 3-D pen), you might be better off printing the pattern on letter-size paper. (Screen protector or no, I’m also a bit suspicious of putting an overheated extruder this close to a device’s screen.)

The choice of patterns in the app is very limited, but you can also import images from your device’s photo gallery to turn them into stencils. (As a result, you can pick up an object in the wild and then bring it up in the app to reproduce from your hand.) 3Doodler has an archive of printable stencils, and a web search will reveal many more patterns.

You can even draw in three dimensions with the Play Pen. To do this, set the pen to the slowest extrusion speed, draw a small circle on a surface that will serve as a base, and then slowly bring the pen up, keeping the filament taut. It even hardens while drawing. This allows you to connect elements, draw spirals, and much more. You can also create a three-dimensional object by creating two-dimensional objects (such as the sides of a building) and then “welding” them together by extruding hot plastic along the seam at the correct angle.

During testing, I made some 3D constructions, but mostly drew some freeform objects or traced patterns on stencils. My experience was very comfortable and the pen was easy to control, although I never quite managed to change the extrusion speed. Artistically, I would classify myself as a scribbler, and the piece lends itself to this form of unguided creation.

The Play 3D Pen offers good basic functions. Filament feeding turned out to be easy, with no interference. That is, it was difficult to control the extrusion speed. Supplies – namely, packs of filament – are hard to come by, but you can find replacements. Polaroid has very few templates in its tracking app. Fortunately, the app “stencils” your own photos, and you can find other patterns to follow up elsewhere.

The price is right, and the Polaroid Play 3D Pen is a great choice for artists and artisans who want to try (literally) trying to make three-dimensional objects out of molten plastic (and not afraid of getting a good piece of plastic) residue on her workbench).

The affordable Polaroid Play 3D pen is a great introduction to the world of freehand 3D drawing, although it can be difficult to control the extrusion speed.