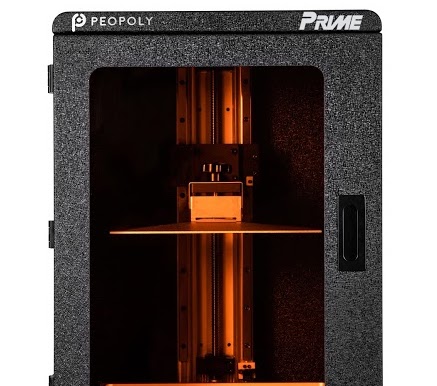 Hong Kong-based 3D printer maker Peopoly has announced the launch of the latest addition to its Phenom line of machines, the Phenom Prime.

Peopoly’s Mask Stereolithography (MSLA) system is powered by a brand new 5.5K HD panel and can transmit light faster than the original Phenom, allowing it to print parts with higher resolution. With a build volume of 276 x 155 x 400 mm, the 3D resin printer is also up to four times larger than its competitors and offers customers entering into prototyping or small series production a faster throughput solution.

Founded in 2016, Peopoly specializes in the manufacture of MSLA 3D printers that selectively expose resins to LEDs masked by LCD. According to the company, this “LCD + LED” approach is much faster than normal SLA when printing large objects or large quantities of small parts because entire layers can be cured at once.

Since the introduction of the original Phenom, the company has incorporated MSLA into each of its new machines while adapting individual specifications to meet the needs of different customers. For example, in March 2020, the company released the Phenom L with a build plate design that allows for much larger prints, as well as the speed-oriented Noir, which is specifically designed to give users accelerated print times.

Since then, Peopoly has grown up with the Phenom XXL, which has an exceptionally large build volume of 527 x 296 x 550 mm. The machine’s whopping 6.5 kg tub is designed for customers in the medical and automotive industries, as it can produce larger quantities of parts without having to refill.

With the introduction of the Phenom Prime, the company has now returned to making more conventional machines, again with a focus on resolution, based on brand new hardware that allows users to make the leap from 4K LCD to 5.5K HD 3D printing .

While the Phenom Prime has a familiar dark gray and orange look, it has a number of under-the-hood improvements that make it Peopoly’s most accurate 3D printer to date. The system’s 5448 x 3064 HD monochrome panel enables a pixel pitch of 51 µm and a fast transfer rate that reduces exposure times by up to 70%.

Like its predecessors, the Phenom Prime is compatible with Peopoly’s proprietary Deft resin, and when used together, users can expect a 100% increase in speed over the original Phenom. In addition, compared to the Phenom, the Prime has a new cooling system that allows the LCD panel to last up to three times longer than before.

As always, the latest Phenom is designed to compete with what Formlabs has to offer, and Peopoly points out that the Prime is four times larger than the Form 3, claiming that it is 500% faster at full capacity. Going forward, the Prime has the potential to get faster too, as its Chitu controller is upgradeable and enables 8K editions, while the upcoming CHITUBOX Pro software is expected to optimize its printing results.

The technical specifications for the Phenom Prime can be found below. Readers interested in purchasing the machine can visit the dedicated Peopoly home page for more information. The system can be ordered from April 2021.