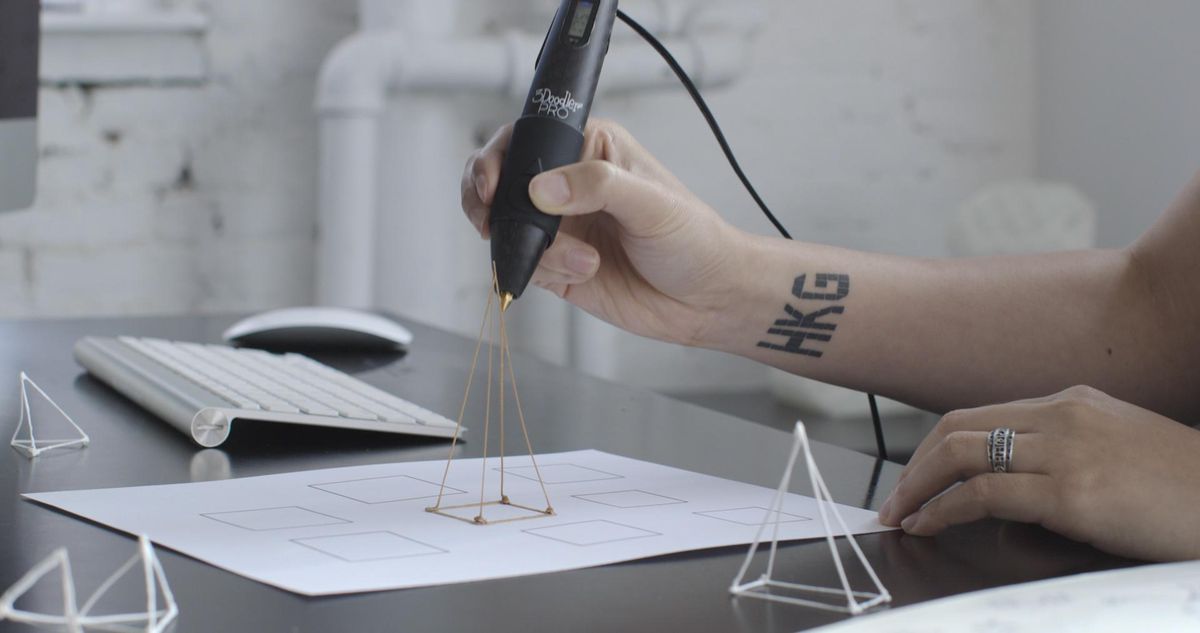 About a decade ago, Maxwell Bogue was nearing the end of a 14-hour job on his 3D printer when a disaster struck. The 3D printer skipped a level and effectively destroyed the part. “We had two perfectly finished pieces that weren’t in place,” recalled Bogue, shaking his head. “My business partner said,” I wish you could just take the nozzle off the 3D printer and weld the parts back together. “

And just like that, the original 3Doodler was born. Often compared to a glue gun that extrudes molten plastic instead of glue, the idea is deceptively simple. A 3-D pen is essentially a hand-held extrusion-based 3-D printer that “draws” designs in the air – that stay there and build up from a desktop base.

A year of iterative design taught the team that would become WobbleWorks, the company behind 3Doodler, that “the concept is simple and the execution more complex, like most things,” said co-founder and CTO Bogue. In addition to the pen shaft and extrusion nozzle, a 3-D pen requires a precise motor, finely tuned temperature control and extrusion speeds, and easy material change in a hand-held, user-friendly package.

After the technology was cleared up, the growing team at WobbleWorks tried to bring it to market. For co-founder and CEO Daniel Cowen, a major focus before fully launching their work was patenting. “A lot of people produce something new and say, ‘Oh, that’s neat. ‘We knew we had created a new category when we did this. We came out of the gate with a provisional patent in the US. “To make sure they are strategic to protect their hard-won intellectual property,” we have filed patents in China, the United States and Mexico, as well as Hong Kong as this is an important shipping point. “

Cowen led the team to pay attention to the data behind Kickstarter, where they decided to launch it. “We looked at many of the markets that were very supportive of Kickstarter and used that as a guide,” he said of the IP strategy. “We covered America, Canada, Europe, Australia, South Korea, and Japan. We were also attentive; Patents are expensive and take a long time to be granted. “

The launch itself seemed practically the perfect example of a Kickstarter launch. An easy-to-use, easy-to-understand 3D printing product first launched in 2013, during the heyday of consumer hype about these technologies, brought significant support. The WobbleWorks team has raised nearly $ 4 million in support through two crowdfunding efforts. Not bad for products that retail today from $ 30 for a kids’ version to a professional model for $ 200.

And then came the harsher reality of being a top notch product. While the 3Doodler was the first 3D pen on the market, it wasn’t the only one for very long. The team understood the importance of IP protection – while waiting for their patents to be granted in full, they filed what Cowen called “slips of paper we could wave around” – but they did it not. It doesn’t take long before similar products are created.

Within the first two years of its launch, copycat 3D pens had hit the market. They used images from 3Doodler for their own marketing. One memorable video just showed the tip of a ‘new’ 3D pen in action and “it turned out to be our pen; Yours weren’t good enough, ”said Cowen. 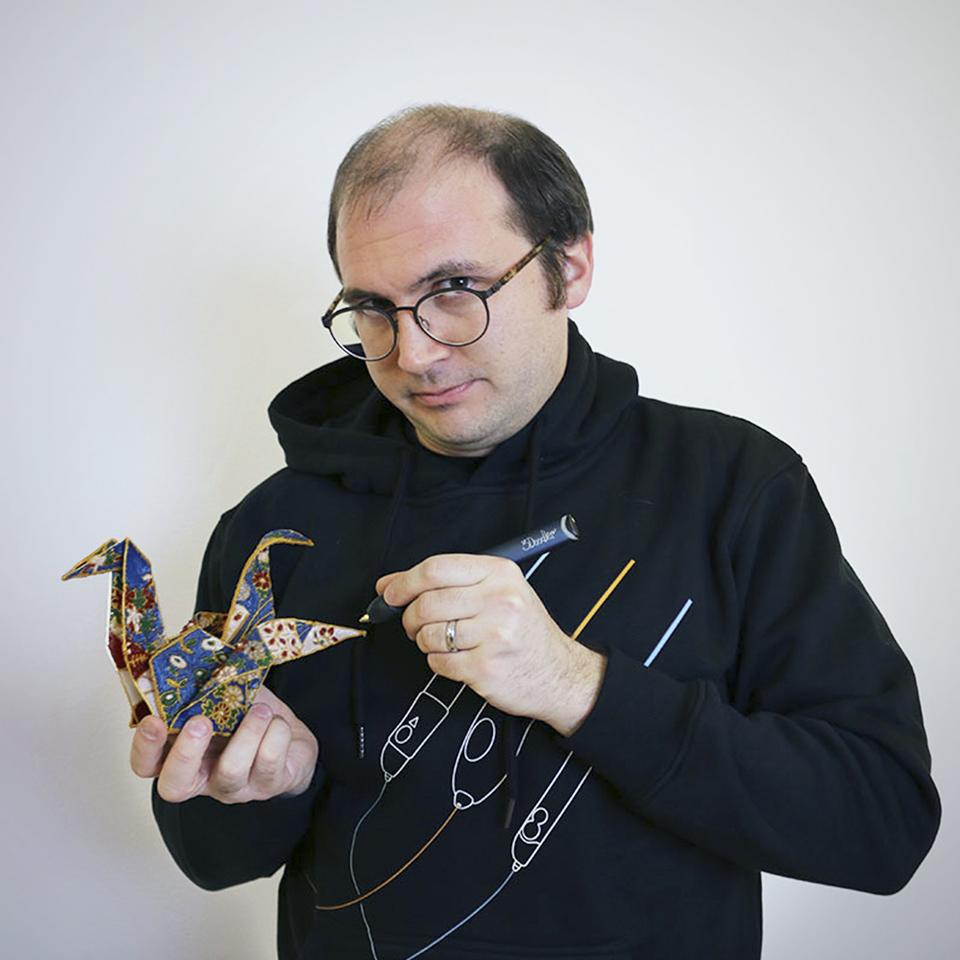 “We have improved along the way, too,” noted Bogue. “And we saw that these improvements were also incorporated into the imitators. They even copied mistakes. “In the event of a 3Doodler delivery error, some pens were delivered by the supplier with a piece of Kapton tape in the device. “I always buy the fakes and take them apart and check them. They started coming out with duct tape, ”said Bogue.

By 2018, five years after launch, “we had eaten up a lot of our market share,” recalled Cowen. “It’s a very difficult pill to swallow.” Knockoffs copied branding, technology, and IP – and generated revenue large enough to affect 3Doodlers. The difficulties then came as quickly as the success in the beginning. The company “hit rock bottom,” struggled to grow revenue, laid off employees, and occasionally wondered why they were making all efforts in the first place.

For many startups, this could mean the beginning of the end. But 3Doodler fought back. In a fierce battle, the team ended up spending more than $ 2 million in legal expenses protecting what they had created.

The 3Doodler team gained some leverage in 2018 as many of their patents were granted in full. “We finally have the opportunity to enforce it,” said Cowen. “You could argue that we designed the market the way it needed to be, including removing imitators from platforms. We don’t have to own the entire market. Nobody has to monopolize a market, even if they created it. But there has to be a certain amount of quality. “ 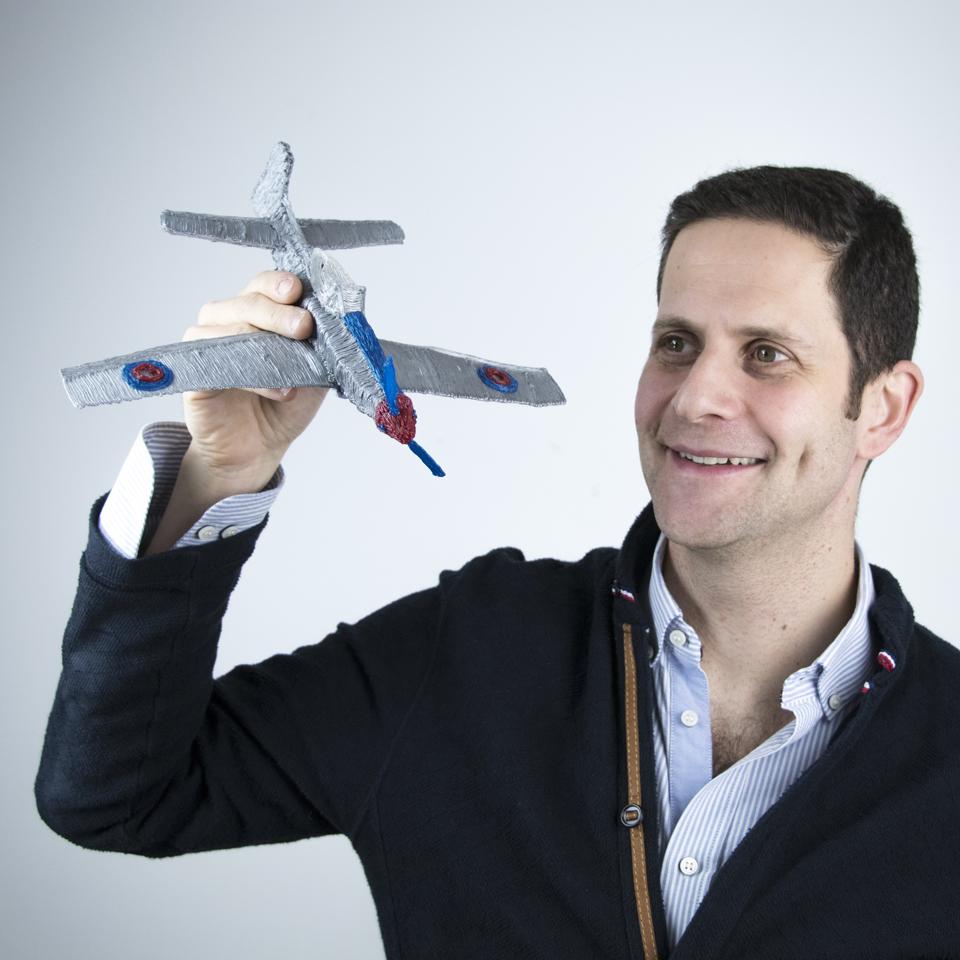 Daniel Cowen, co-founder and CEO of 3Doodler, with an airplane that was “drawn” with a 3D printing pen.

Fake 3D pens were removed from online retailers in cease and desist letters. Court judgments upheld WobbleWorks’ claims regarding specific examples of new 3D pen violations. The team hired its own lawyers as well as outside legal experts to “make a measured and judged decision as to whether these pens were in violation,” Cowen said. Since then, they have “been able to enforce their rights fairly forcefully”; Cowens recalls that her legal action has “removed over 5,000 entries, which really speaks for the proliferation of imitators”. He realized that “that’s not 5,000 pens; There are maybe five pens with color or name variations from different online marketplace sellers. We could turn these off one by one. “

“As a company focused on innovation, you don’t want to waste your resources on legal fees,” said Cowen. “But would there be innovations without patents? Patents let us play in the market, which allows us to make money and keep innovating. We now have several lines. It takes money to be innovative. Recalling a recent call to protect intellectual property, Cowen added, “It’s always the innovator who makes that investment. We’ve always put every dollar straight into the company to keep innovating. “

This legal investment has apparently paid off. With a strict licensing strategy, the team was able to more than double sales. To date, more than 2.5 million 3Doodler pens have been shipped to customers.

Quality control and market awareness are absolutely necessary when introducing high-end 3D pens in particular. The latest 3Doodler offer, the Pro +, is aimed firmly at professionals: architects, artists, designers, engineers. It can work with seven different materials, including plastics reinforced with wood and copper.

It can also function as a “useful repair tool”, emphasized Bogue: “It is a hand-held plastic welder.” With a plastic thread filled with wood, the Pro + Pen can fill cracks between planks, which can then be sanded down to match the appearance of the floor. Other materials work well for other repairs as well, welding PVC tubing on the go, repairing plastic parts in cars, and other small plastic fasteners are surprisingly useful uses for a 3D pen. 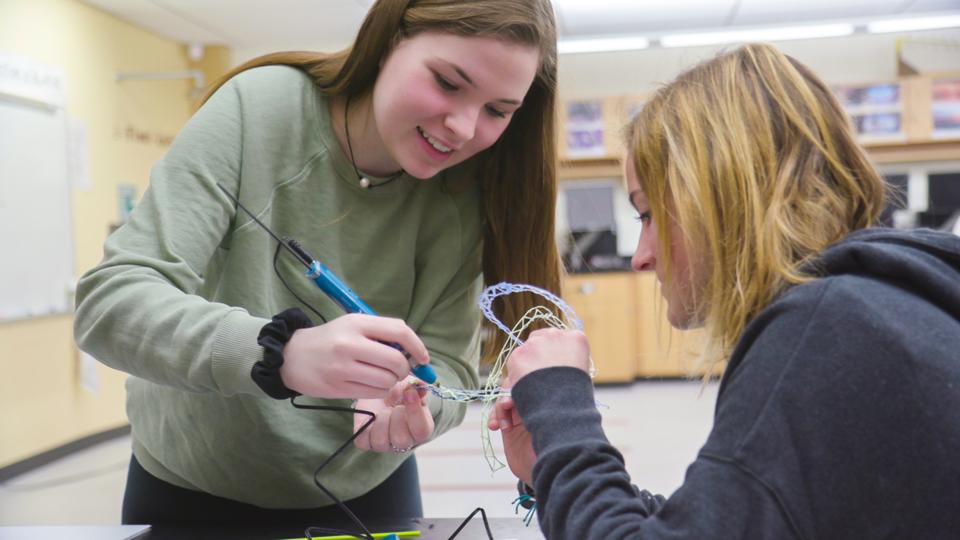 The students work together with the 3Doodler Create + in a classroom.

On the entry side of the 3D pen market is education. With 3D pen sets for K-8, grades 8-12 and university levels, more than 8,000 classrooms worldwide are equipped with 3Doodlers. Curricula tailored to these markets have evolved, including “home kits developed from home as a Covid hit,” Cowen said.

Such a development of the offers is now possible because the team can concentrate on research and development again. Pouring funds into IP battles rather than ongoing innovation has hampered next generation product development for some time. A capital-intensive R&D project will soon lead to a start that is now planned for mid-2021. This upcoming introduction would have come out a year ago. “If we hadn’t been plagued by imitators,” remarked Cowen. “Fortunately, we now have the money to invest in research and development. This is directly related to these platforms and ultimately enables us to defend our products. “