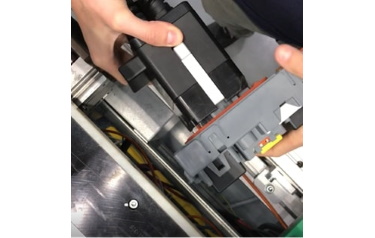 Ford Spain is the first car manufacturer in Europe to use the Form 3L, a large format 3D printer from Formlabs.

Ford Body and Assembly in Valencia uses the 3L form to make plastic caps that are used in a vacuum test to check engines for leaks. 3D printing helps Ford prototype new tools and produce certain parts in less time and at lower cost than traditional manufacturing.

The Ford body and assembly plant used a Form 3 desktop 3D printer and has now added the Form 3L to its manufacturing processes with a print volume of 33.5 × 20 × 30 cm. Stereolithography 3D printing helps Ford develop prototypes with a high surface quality that is similar to the final product. However, 3D printing proved especially valuable when Ford needed to make a specific part for an engine quality inspection tool. The entire production cycle from design and prototyping to the final product was completed on site at the Valencia plant.

“It was the first time for us that 3D printing was used for this purpose, but we are very happy with the result,” comments Carlos Cambralla, Reliability and Maintenance Engineer at Ford Motor Company in Valencia. The company needed special caps for a tool that controls whether a motor is tight and not leaking. The plastic caps developed by Ford are used in a vacuum test on an engine. Therefore, they must be flexible to seal tightly, but they must also be able to withstand the low pressure during the test. After designing the specific plastic caps for this tool, the team developed prototypes before finally 3D printing the final elements. Since Ford only needed around 1,000 of these plastic caps, 3D printing was the best choice. “Sometimes we needed the caps the next day, so it was important to make them as soon as possible,” says Carlos Cambralla. For a comparatively small batch of these items, it was also cheaper to manufacture them on site. By moving the production of this part home, Ford did not have to rely on outside suppliers and was therefore able to keep assembling it.

“We are proud to support an automobile manufacturer as renowned as Ford. With the help of 3D printing, prototypes can be developed much faster, but finished, fully functional parts can also be produced within a very short time. Nowadays in particular, it is even better not to have to rely on extensive supply chains, but to have the autonomy to manufacture such parts quickly in your own plant, ”says Stefan Hollaender, Managing Director EMEA at Formlabs.

With its large print volume, the Form 3L can print many of these caps in one print job. Ford has also used SLA 3D printing to replace broken pushbuttons on electronic devices using the transparent clear resin to see the internal LEDs. So far, Ford Body and Assembly Valencia has printed almost 100 different parts. 3D printing has become a useful addition to your manufacturing process.