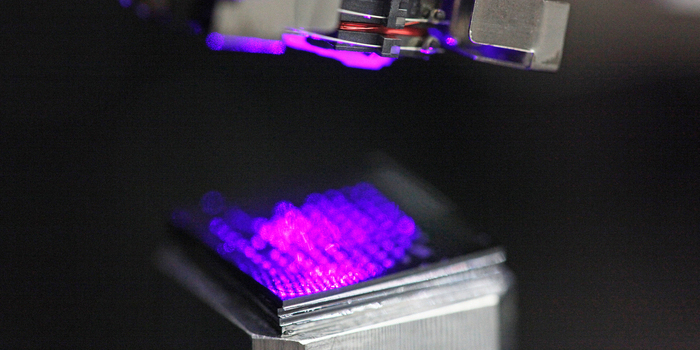 We have seen several instances where mass-produced gaming systems such as the Microsoft Kinect Xbox 360 scanner have been used for purposes other than gaming. Recently, a team of researchers from the Technical University of Denmark (DTU) published an article titled “Micro and Nano 3D Printing with Optical Pickup from a Game Console” about how they hacked a Microsoft Xbox 360 and used one of its common components to create the replace expensive, conventional optics in their research equipment and develop their own affordable 3D printer that can print objects in the micro and nano range. This is a great example of how access to microscale and nano-scale 3D printing can be made easier by just cutting costs.

“With our 3D printer, which can print micro- and nano-scale 3D objects, we can reduce printing resolution from ten micrometers to hundreds of nanometers without expensive special components,” said PhD student Tien-Jen Chang. “And we have a simpler and more compact nanoscale 3D printer compared to other stereolithography systems.”

The team developed a stereolithography 3D printer, usually referred to as an SLA or SL, although it is referred to as an STL in the research. This technology uses light to cause chemical monomers and oligomers to crosslink together to form solid objects.

“In this article we present the use of an OPU (Fig. 1a – c) as a compact and cost-effective solution to replace the traditional optical STL system and to drastically eliminate the complexity of an STL system,” they write. The researchers believe the results from their nanoscale 3D printer could be useful for various healthcare applications.

“We believe this technology can affect different areas of health technology. The original goal for developing our own 3D printer was to be able to print cubic centimeter volumes with micro / nano resolution for our micro container based drug delivery development. And we couldn’t find a 3D printing system on the market that could. So we had to make our own, ”said Associate Professor En Te Hwu.

In addition to printing our microscale containers the diameter of human hair (100-300 microns) for more efficient oral drug delivery developments, this system can also be used to print painless microscale needles that are used on skin patches to accelerate transdermal drug delivery developments . Another option is to use it to print 3D structures for the cell culture environment for more accurate ex vivo drug testing studies. A final example is the printing of biocompatible micro devices with nanostructured surfaces that kill bacteria. “ It is not easy to make nanoscale photopolymerization an inexpensive solution. Using the Xbox Optical Drive Storage Unit (OPU) is a great way to accomplish this. The researchers explained that the OPU is used to read and write data from optical storage discs, including CDs, DVDs and Blu-rays.

“The mass-produced OPU (costing less than $ 5) not only provides a light source, but also diffraction-limited optics in a compact size, similar to a car key,” the team wrote. “Because of its high-precision measurements and multi-wavelength laser modes, the OPU has been used for various other applications, such as atomic force microscopy26,27,28, biosensors29,30 and photolithography31.” They explained that a compact HD DVD OPU can potentially simplify the design of an optical system because it has a “finely tuned diode laser” that allows the user to adjust the resolution from tens of micrometers to hundreds of nanometers. without using expensive femtosecond lasers or oxygen scavengers. It also has an optical working distance of 1.25mm, which is four times that of a Blu-ray OPU, making it a flexible option for SLA printing, and offers a continuous wave of multiple wavelengths (405 / 650/780 nm) semiconductor laser diodes for reading HD-DVD / DVD / CD data. “

The researchers used a commercial photopolymer to evaluate the performance of their nanoscale 3D printer with various laser exposure parameters, and also showed how its “vastly simplified optics” were used to 3D print stereoscopic microstructures. They were able to achieve a resolution of 385 nm along the lateral direction, and the “linear XYZ nano-resolution levels enable a print volume of up to 50 × 50 × 25 mm3”. Due to the fact that the printer uses much simpler and less expensive optics, this could help create the conditions for lower-cost, high-resolution, micro- and nano-scale 3D printing. The team sees a lot of potential for commercialization and plans to set up a spin-off company in a few years.