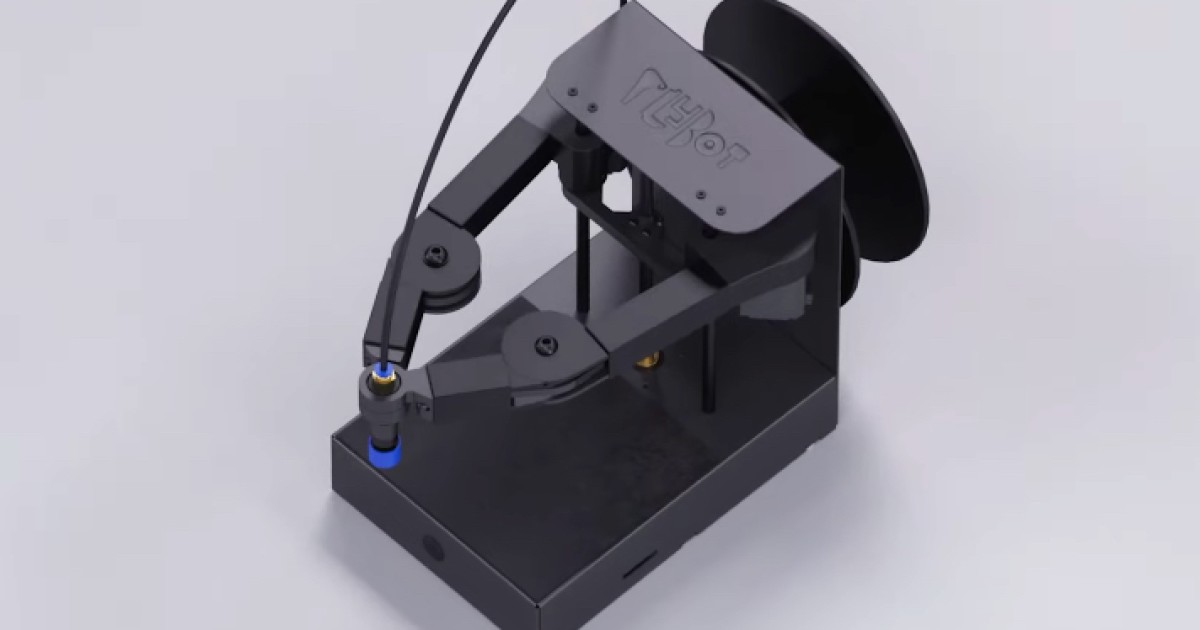 In most consumer 3D printers, the printhead moves by sliding horizontally along the rails and vertically along the bars. However, the Plybot differs in that it “holds” its head in two robotic arms.

Invented by British engineer Josh Mitchell, the device is now being commercialized by California-based Hangar 75. Like other Fused Deposition Modeling (FDM) 3D printers, it uses spools of plastic filament, which it melts and extrudes, and three-dimensional objects build up a layer of molten plastic at a time.

Most FDM printers have a frame built around and above the print bed. The printhead – which contains the extrusion nozzle – slides back and forth on rails within this frame and moves vertically along integrated rods.

In contrast, the Plybot’s nozzle sits on the connected ends of two motorized hinge arms. These move it across the horizontal plane as the entire arm assembly moves vertically along a series of three rods at the rear.

Why bother? Aside from the fact that the Plybot is pretty fascinating to look at, it is said to run much quieter than traditional FDM printers, is more compact, can print to the edges of its print bed, and is generally less mechanically complex – and therefore relatively inexpensive.

The Plybot ended up selling for $ 399

The additional features of the Plybot include a print bed with automatic leveling, a fan and sensors to control the filament flow. It is said to be compatible with a wide variety of plastic types and can receive user-created CAD files via WiFi, USB or SD card. However, using a dedicated iOS / Android app, users can choose to print various preprogrammed objects.

Potential buyers should note that the maximum print size is 7 inches wide, 6 inches deep, and 5 inches high (178 x 152 x 127 mm). Depending on whether they are just experimenting or creating a finished product, users can choose between draft, normal and fine printing speeds. The resolution ranges from 0.05 to 0.3 mm.

If interested, the Plybot is currently the subject of an Indiegogo campaign. With a promise of $ 339, you’ll get one if it hits production. The planned retail price is $ 399.

You can see it in action in the video below.